Slipping into port at Ketchikan. We thought it was 6 am. but it turned our it was really 5 a.m. What that meant is that we were able to watch the sunrise as we pulled closer to Ketchikan. 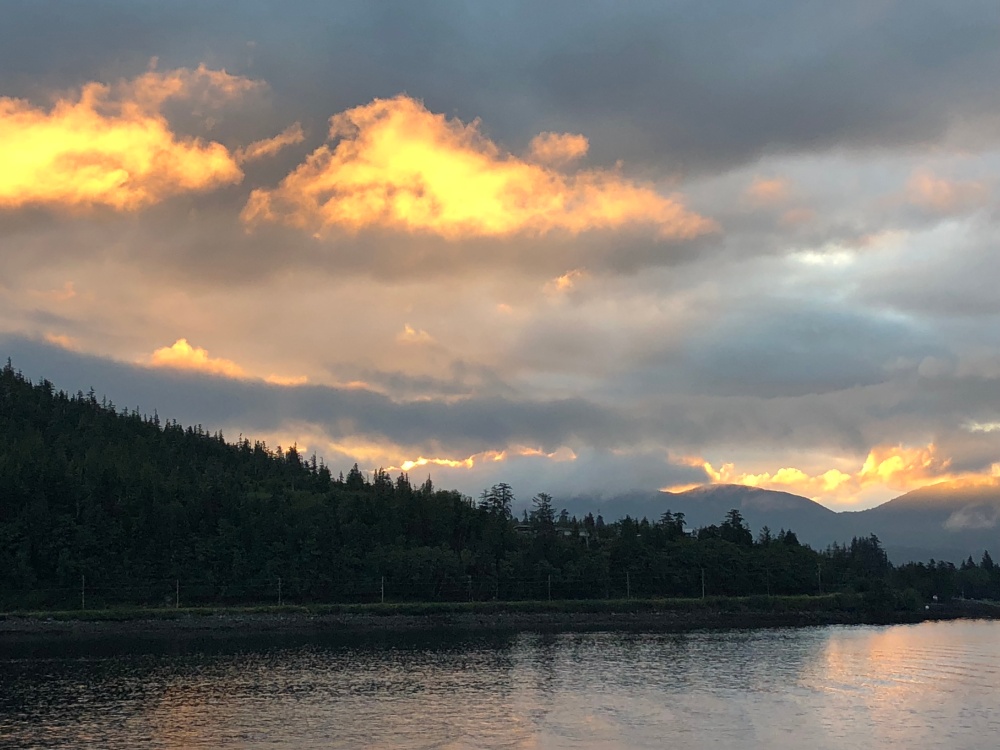 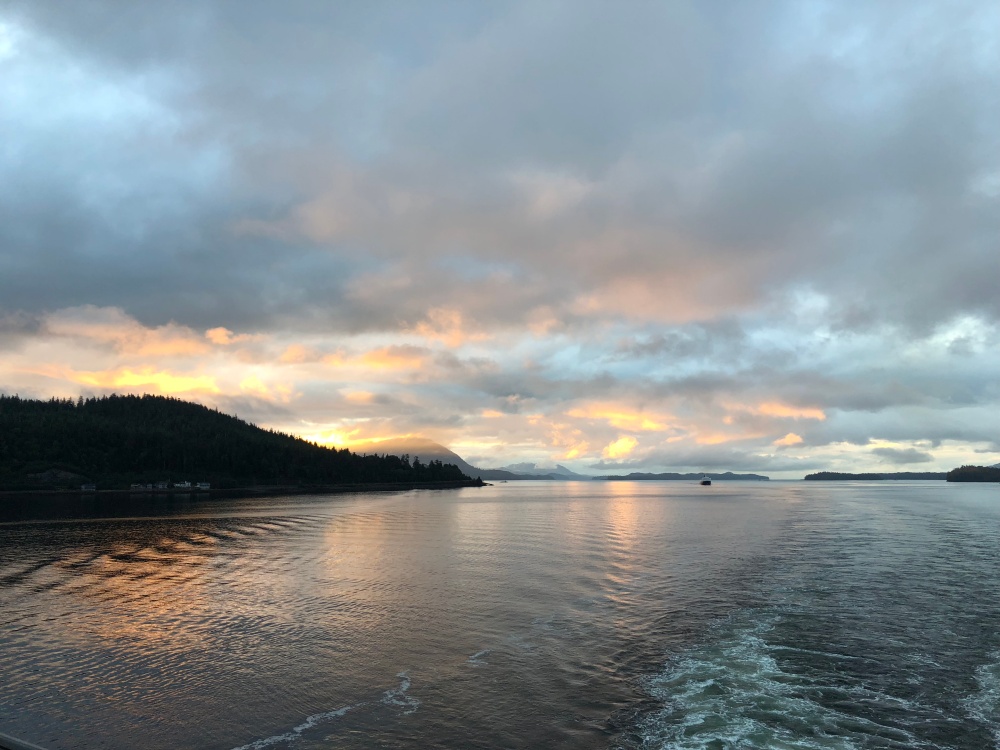 Room Service Time. At 8 we got a little room service snack. Coffee. Tea. Assorted croissants and pastries. Why did we skip the bacon?

Second Breakfast. We decided to check out The Oceanview Cafè for second breakfast before we started our Ketchikan walking adventure. Need the strength. Custom made omelette and eggs benedict and bacon. I did show restraint by not filling my plate. Right?

Our breakfast view through blue glass.

Our first stop – Ketchikan. We had NO IDEA what we wanted to do except we did decide NOT to sign up for an excursion. Once we left the ship at around 10:30 we found a tourist office, got a map that had a walking tour on it, got some good intel from the guy at the desk and then headed out into Ketchikan to see what we could find.

Back of the Ship. We are third from the right on the bottom row of cabins with the curtains drawn

“The Rock.” “Dave Rubin’s bronze monument “The Rock” was unveiled at Berth 1 on Sunday, July 4th, 2010. It features seven life-size figures from Ketchikan’s past: Chief Johnson, a logger, a fisherman, a miner, an aviator, a Native woman drumming, and an elegant lady in her 1890s finery.” 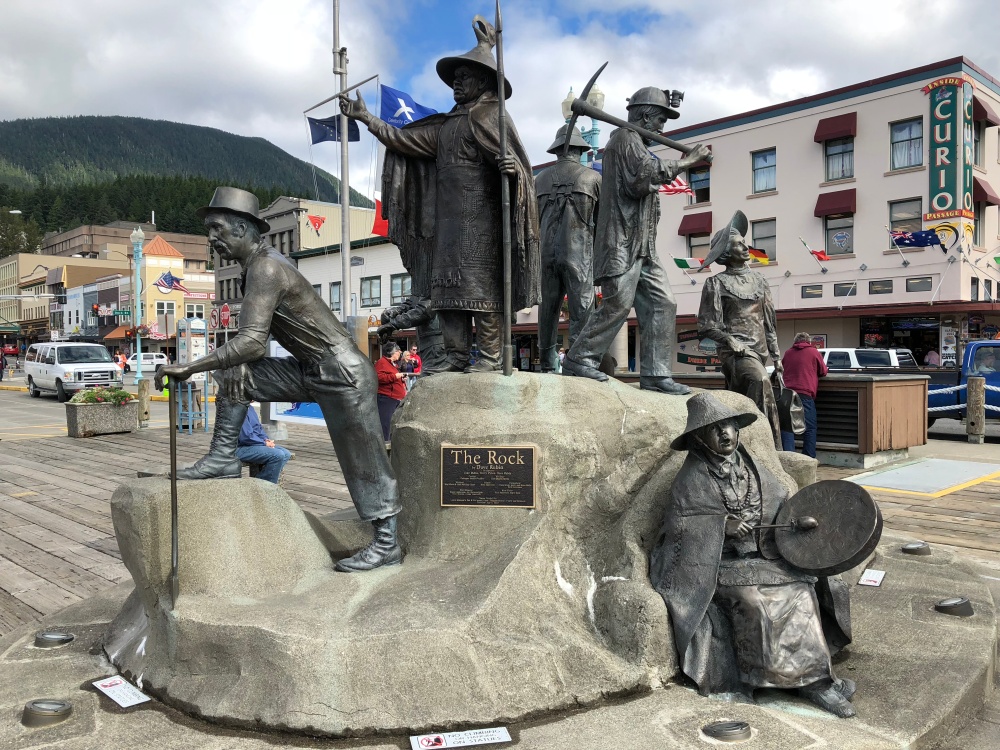 Salmon Capital of the World. Ketchikan here we come. 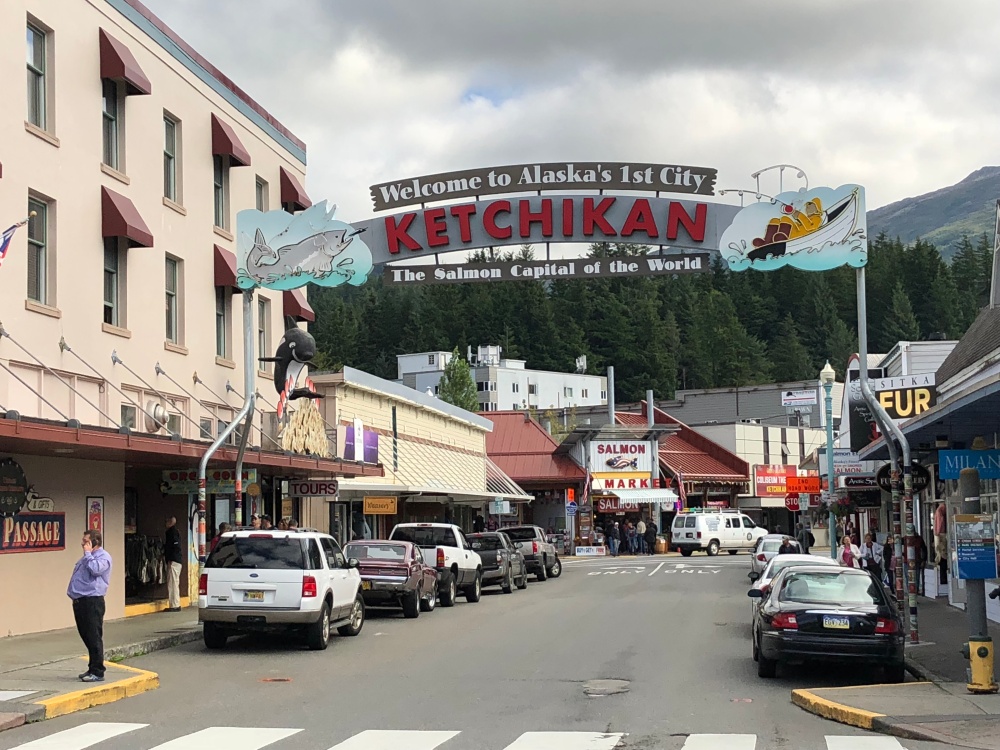 Totem Pole City. On the hunt for totem poles. Met a local who said if we hugged the totem pole we would have good luck. 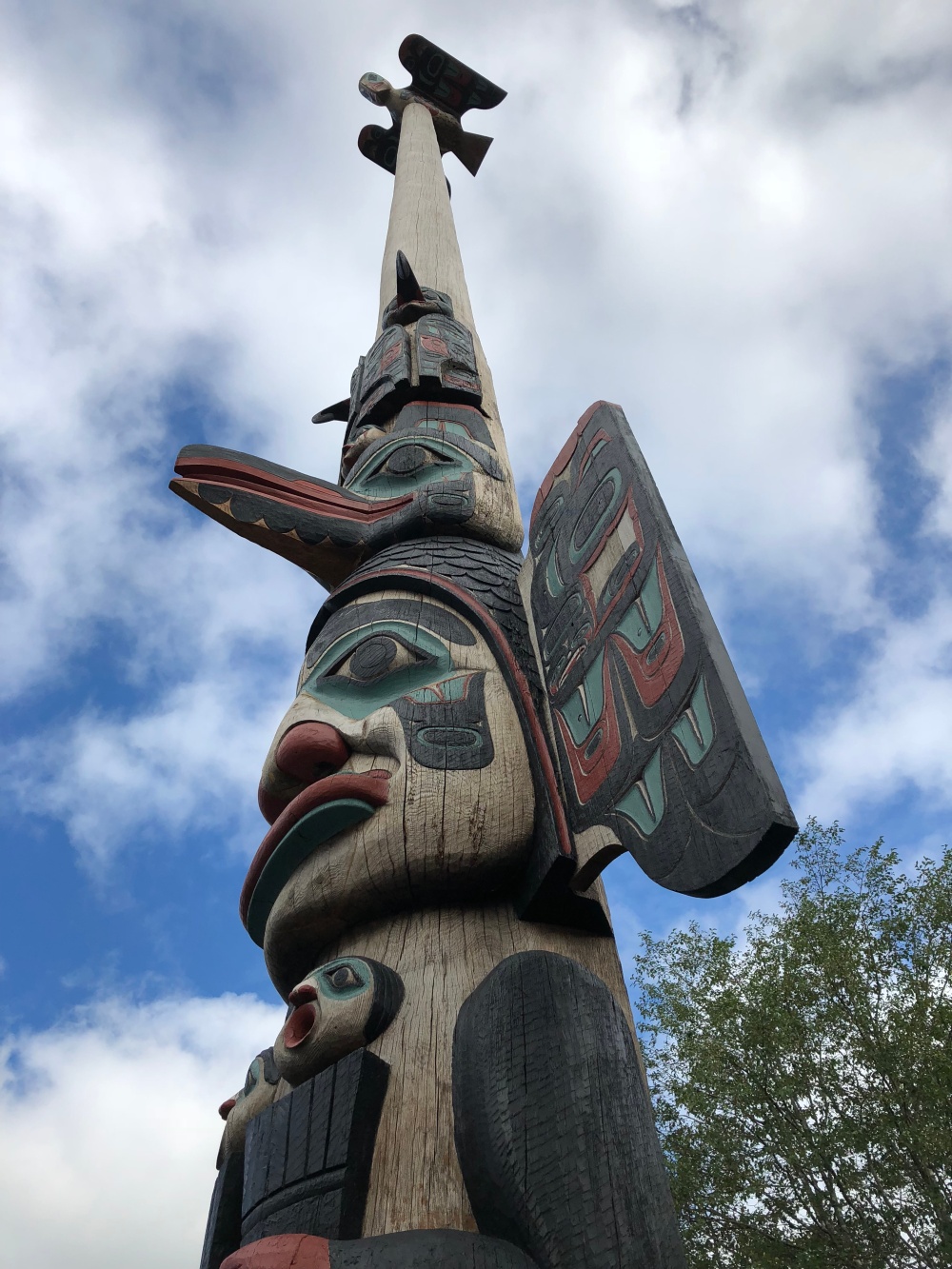 Salmon Time. Next part of the tour was chasing the salmon as they moved up river to spawn.

Salmon everywhere. We followed them up the salmon ladder up to their spawning site. Yes, those are all salmon.

Totem History Center. I am totally fascinated by these 19th century totem poles. These were all made in the 19th century in a number of surrounding villages 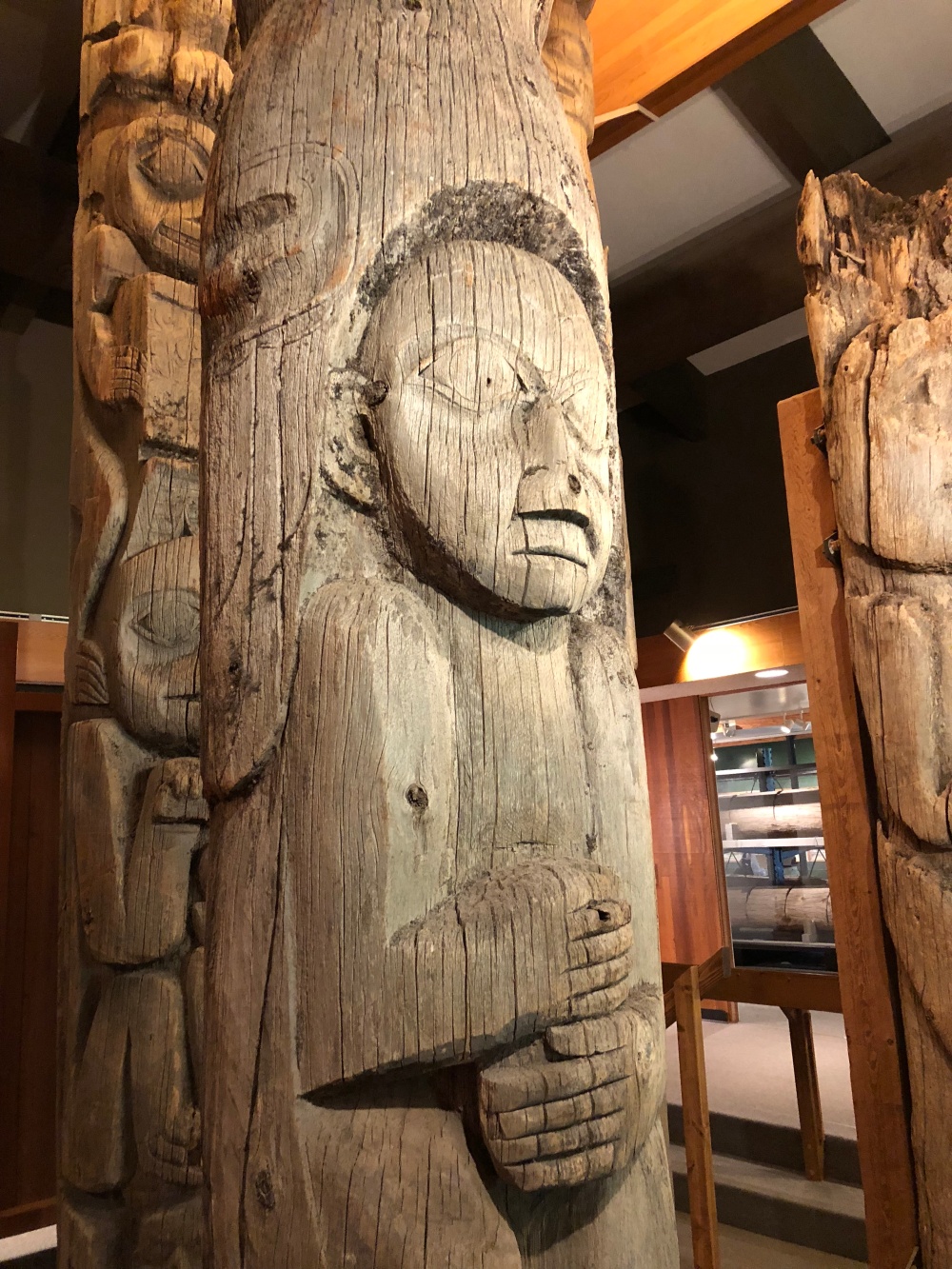 More totem poles. These were outside the center 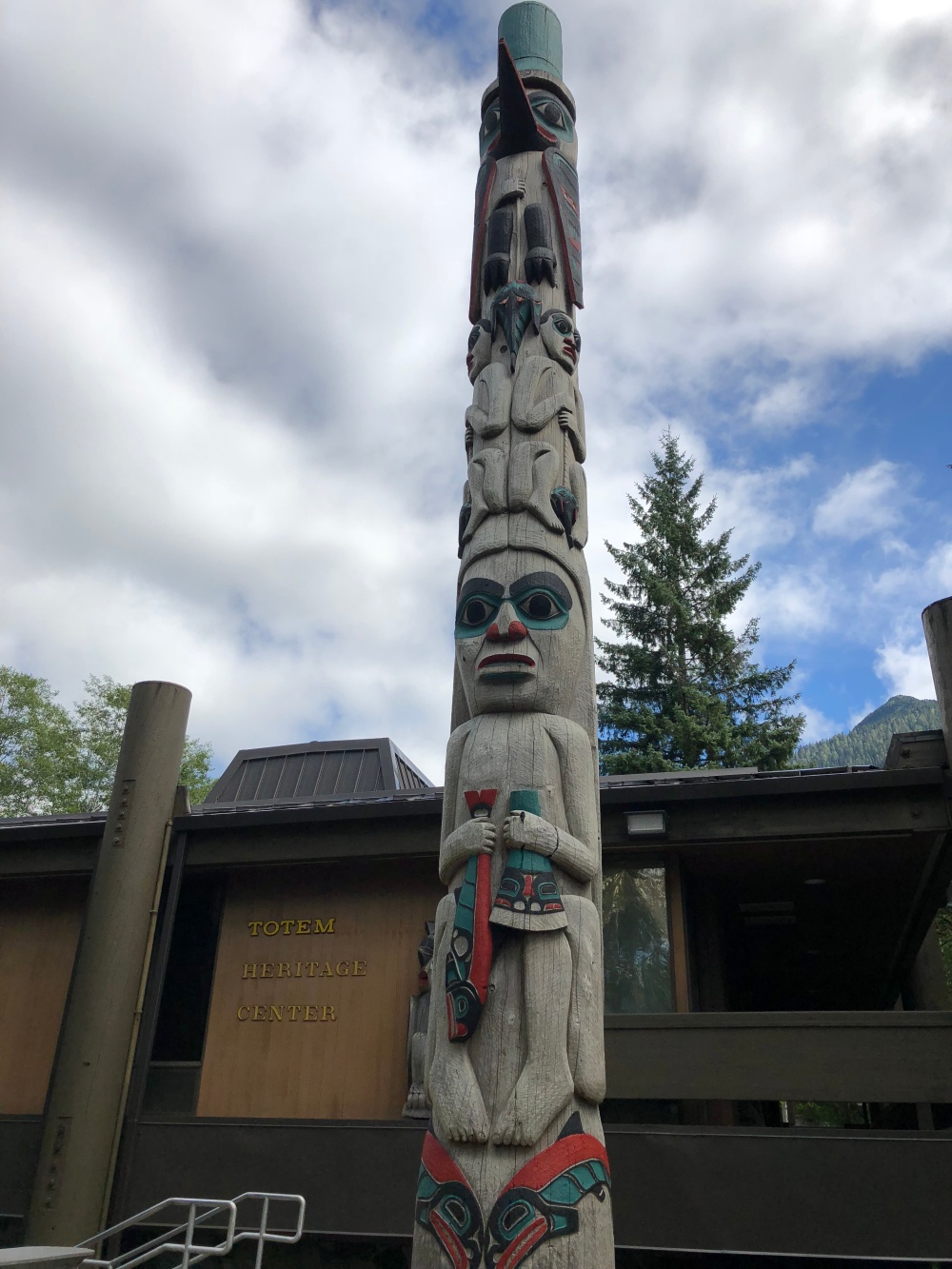 Ketchikan Walking tour. I think we walked about three miles today. It was a great day.

Bear show. Back on board and it was nap time. then at 3:15 we headed down to the bear show, It was another in the  “Beyond he Podium” lecture series with the naturalist Brent. This time he still said “you guys” a lot but he also flopped around the floor at least five times showing us what to do if a bear attacks among other things.

Jay Gubitz hour. One of the greatest blessings of the trip so far was the the couple we met at the Martini Bar – Carl and Shelley from Olathe, Kansas. From the challenges we both face to the things we love and enjoy, we have so much in common. A real blessing just to be able to have an our or so of conversation with them. This is another great thing about traveling and in in this case being on a cruise. You get to meet so many nice and interesting people who are fun to share you lives with.

Sock man was back. Cruise Director reveals his lates pair of socks. 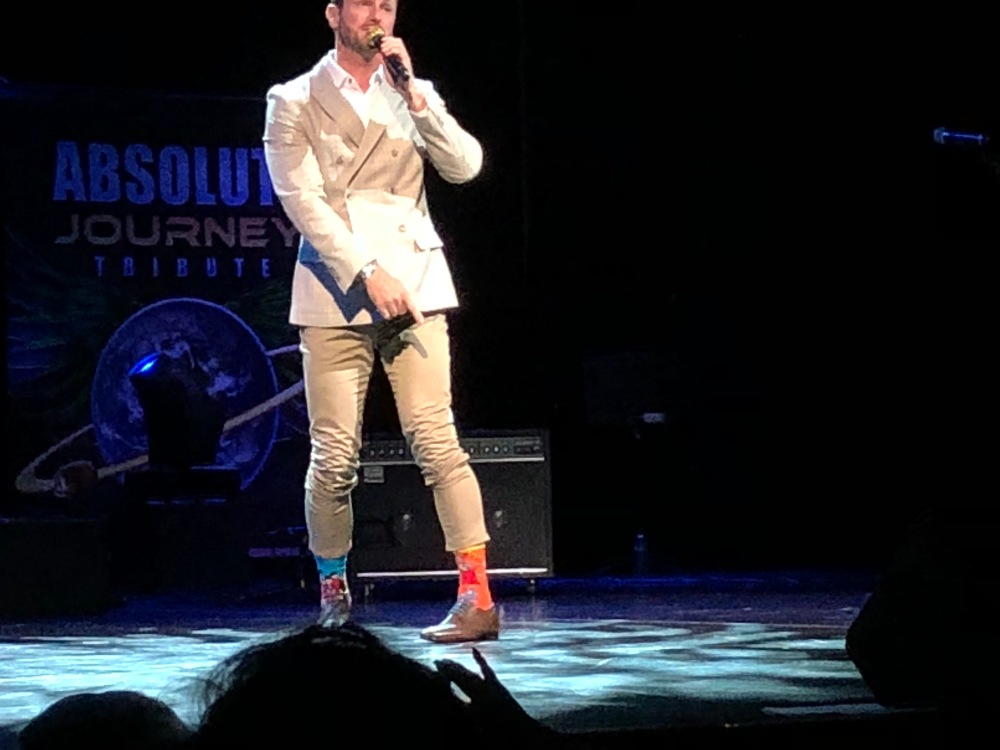 Absolute Journey, Not sure any cruise would be complete without a Journey Tribute band. The Neil Schon lead guitar character was actually quite good. The Steve Perry guy had the notes, but not the presence. Have you ever actually listened to the lyrics to a Journey song? Maybe the words sound good together, but just what do they mean?

Dinner time. Two of our table mates Mitch and Michelle were eating at the Italian speciality restaurant, so it was just us with Joan and Dean. They both had been fairly quiet on the first two nights, but we were able to have a great conversation with them tonight. In our everyday world  it is rare to meet so many new people so quickly, so this has been a fun aspect of the cruise I hadn’t thought much about. Dean is a Vietnam veteran who worked for the same manufacturing company for over 30 years and Joan lived in California and she and her husband were accountants in Beverley Hills but returned to Indiana when her husband’s health started to decline. Dean’s wife died as did Joan’s husband and in their grief they found each other. Married two years now.