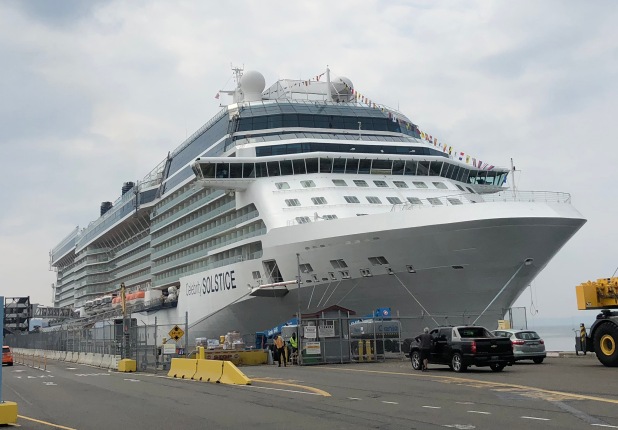 Day One – Sacramento to Seattle to Sea

We never thought of ourselves as cruise people.

We do have many friends who are addicted to cruising, but for most of our lives it just didn’t seem to be for us.

Enter my friend Erin Larkin. She’s a parent of two former students at Del Campo and we served on Site Council together (talk about boring) and I alway knew she was a travel agent specializing in cruises. Sooooo when I saw her at Sarah Freese’s grad party in June, I said “What would be the best way for us to cruise Alaska this summer?”

That set the ball in motion, and soon we had booked a cruise from Seattle to Alaska on Celebrity. Apparently Celebrity is a little bit higher end and it wouldn’t just be a bunch of young partiers or families with a million kids.

Our departure date was Friday, August 24 and we flew up to Seattle that morning on Southwest. No problem that our flight was over an hour late leaving and that I forgot to check us in until 12 hours after I should have. We still got aisle seats even though we were C7 and 8.

We decided the easiest solution to getting to the ship was a Lyft. So we got one in about 15 minutes on the third floor of the parking garage, What a mad house that was. The ride too about 40 minutes and the cruise terminal was right off of the Queen Anne neighborhood of Seattle.

Arrival and check in. We arrived at the cruise terminal at a few minutes past noon. There were two ships at Smith Cove Cruise Terminal at Pier 91. Thought I’d throw that detail in in case you ever are trying to find your cruise ship while in Seattle. One ship was a Princess and one was ours; both headed to Alaska. We had to walk quite a way with all our luggage to get to the terminal but when we found the table where they put on the luggage tags and the barrage of friendliness began. From that point on we were greeted and smiled at by hundreds of  Celebrity employees. Are they called Celebrities? Once out passports were checked we headed up and escalator to get in a gigantic line to check in. Seemed like it was five times as long as you average airport security line. It actually didn’t take that long and before we knew it we were getting our ship id cards that are our keys to everything on the ship. I didn’t catch her name but the young woman who checked us in was definitely a drama kid in high school.

From there we walked toward the boat through a gauntlet of “celebrities” trying to upsell us on drink packages and excursions. Thanks to Erin we were on top of all that and kindly said “No thanks. We’ve got it covered.” Next, we had our first of many photos taken. Who doesn’t want a photo of you and your wife standing in front of a fake boat back drop to remember that you just survived the longest line you’ve ever been in? How much will it cost?

Then it was a small climb up a ramp and we were ON THE SHIP. I keep wanting to call it a boat, but it’s definitely not a boat. Once on board, we were greeted by crew members with free sparkling wine. It must be free since they didn’t swipe our card. That’s another interesting part of the cruise experience -knowing what have you already paid for and what are you really going to pay for later.

The amazing part was we were totally checked in and on board in just a little over an hour. 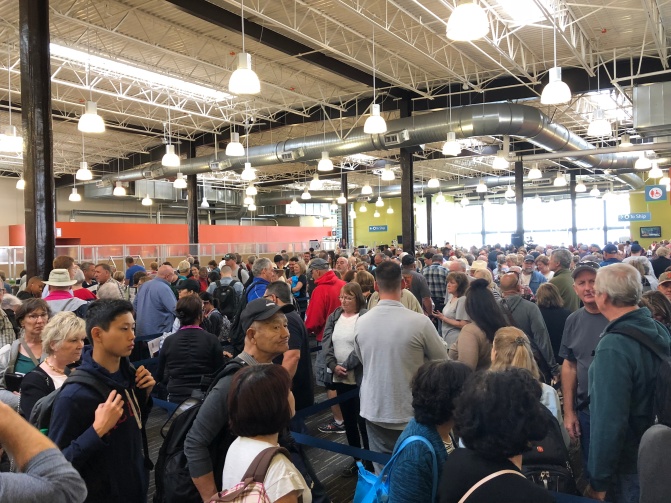 Small glitch. When we checked in the woman at the check in counter (the drama kid) told us we were on deck 8. We had thought we were on deck 6. After braving the elevators up to Deck 8 – I still haven’t figured our when it actually might stop and let you on – we realized 8310 was not the room we thought we had.  So we had to go down to Customer Service and stood in line while being bombarded by way too loud unknown technorap (?) only to find out we were right and were on Deck 6. Disaster averted.

Our Room. Our luggage had not arrived yet, but we did get to see our amazing  room. We are on the back of the ship with a balcony that looks directly off the stern. We are going to see everything. Whoa! 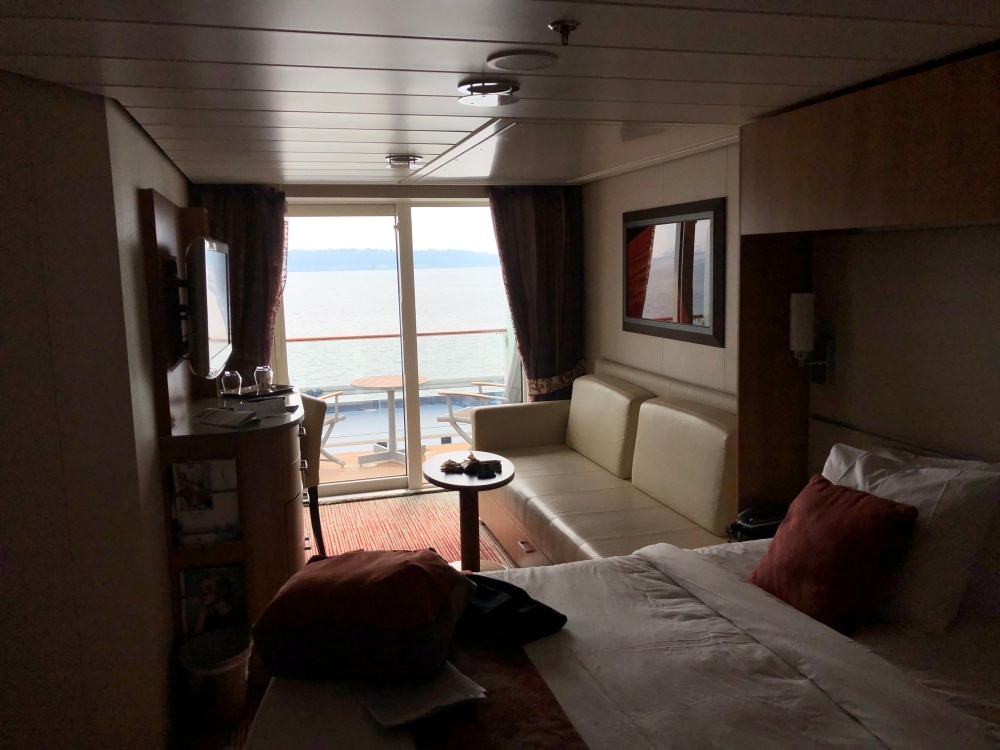 Ship tour. At two we went down and took the first-time cruisers ship tour, which gave us some great info. Even found out they were having a grand champagne opening of a new Tiffany’s store on board tomorrow. Oooooohhhhh. I told Christine just to pick something. We also learned about the “Persian Garden.” which is some not-to-be-missed spa room with heated beds. More upsell. Only 40 slots in the Persian Garden, better buy now. We passed. On the tour ee did find out the place we have dinner at our 8:30 seating so that was good.

Boom! Christine was getting hungry ,so we stopped into the little Italian cafe for some lemon tarts and a couple of Booms! A boom is the double espresso you have at any rest stop when you are driving in Italy. So good, but is it a part of our super drink package? While we were slowly finishing our espresso Christine wanted another tart, but the cafe was no longer serving, Too close to SAFETY MUSTER TIME!

Find your life jacket and life boat. We were herded into the Italian speciality restaurant for the safety presentation. We will be in lifeboat 19 or 20 (I think. Short term memory is not what it once was). Don’t have to worry about the kids. They will have wrist bands on and the crew will bring them to you. There were harsh sounds to remember that will tell us to “Abandon ship!” My favorite though was the cartoon that told us at least a hundred times to “Wash Your Hands.” I’ll be right back. I need to wash my hands now.

Quick bite at the Ocean View Café. We decided we would check out the casual restaurant on the Deck 14. Apparently this is the place where you can get all the food you want any time of day. It’s like a GIANT college cafeteria. We had a good salad and pizza. Only thing we had to swipe for were our glasses of Pinot Noir.  While we were there at around four the boat the boat pulled out of the harbor and we were off. Good by Seattle. 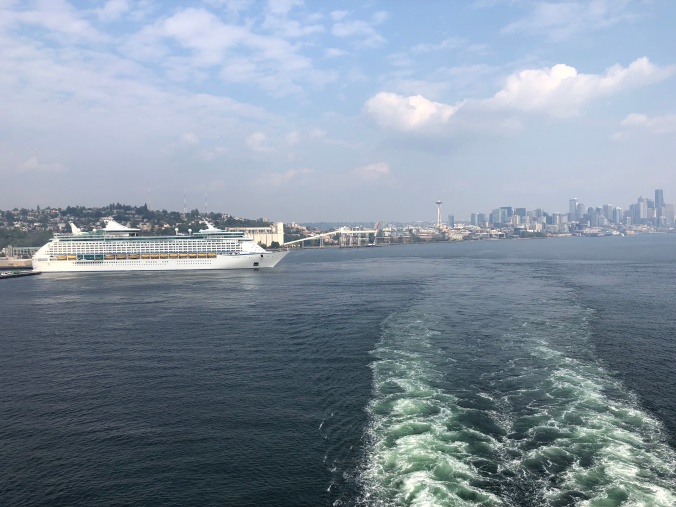 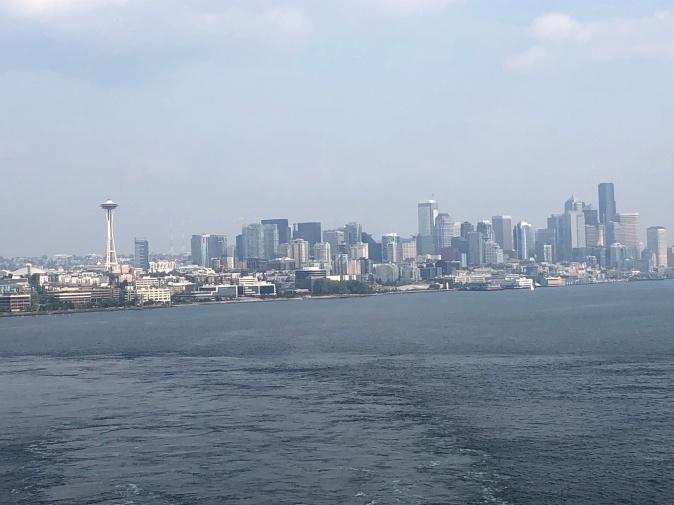 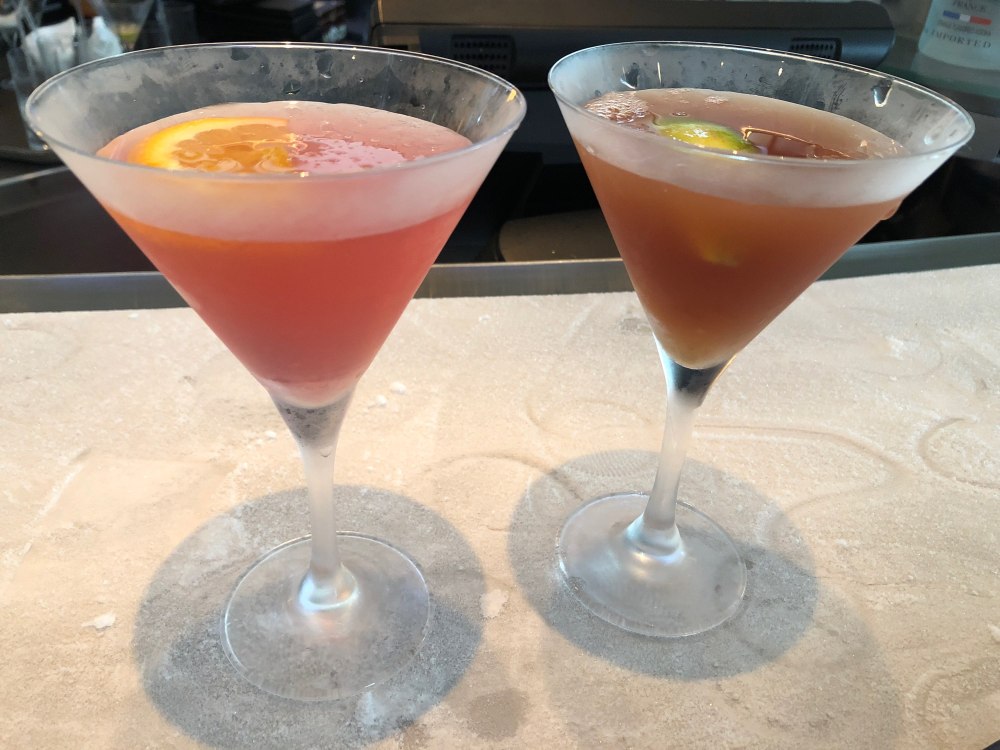 Comedy Show, the Cruise Director, and a naturalist that was just a little too animated. Since we had the 8:30 dinner time, we learned  on the tour that the first show in the big theatre would start at 7 and be a comedian Fred Klett. We are both very leary of any comedian these days. Too many references to a woman’s anatomy and too much politics. But we decided to give the show a try anyway. The show opened with the Cruise Director telling us about many things that were happening on board and then we met the hyper-animated nature expert. He will be doing a number of lectures throughout the week including one tomorrow on whales. Amazingly Fred Klett was great. Super funny. Great rapport with the audience. The shirt isn’t pink. It’s hibiscus. 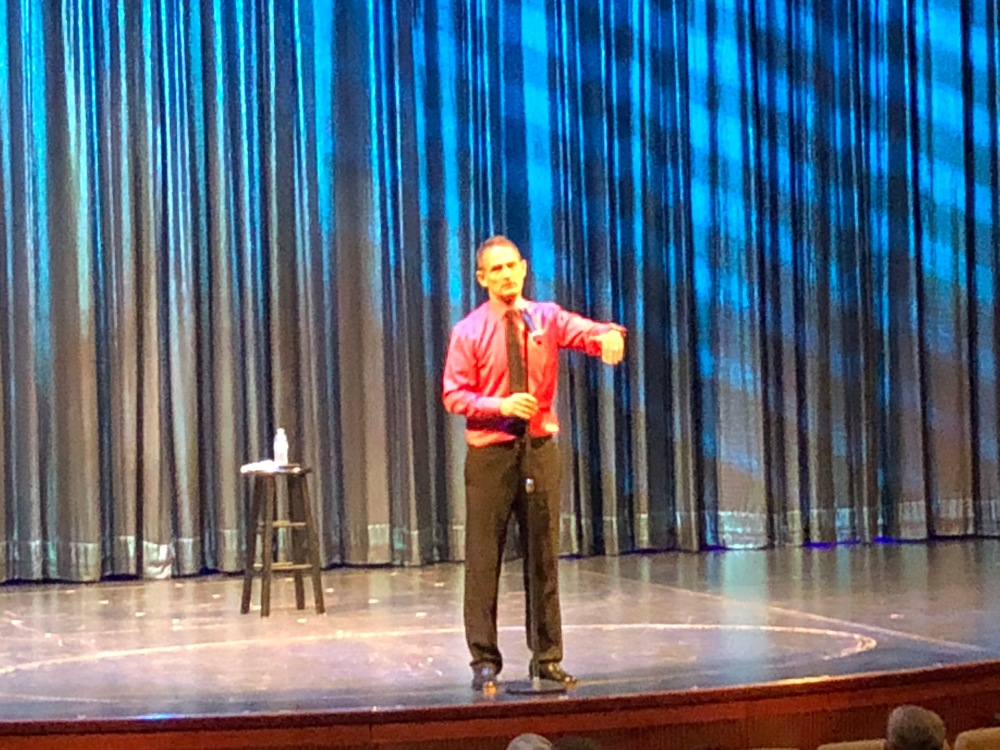 Dinner at 8:30. We had to kill some time until 8:30. Who eats at 8:30 any way?  When we got to the restaurant there was a huge line up to get in. We also had to find our our table number. Didn’t realize they had put a card with all that info in our room. 219. We made the choice when we booked the cruise to sit at a big table with three other couples. Make friends. Chat. You know the drill. Our table mates were Mitch and Michele from Houston and Dean and Joan from Indiana.  Mitch is in the oil business and Dean and Joan have just been married for two year. Both lost their spouses and found each other.

Christine had the prime rib and I had broiled salmon. Delish.