We wanted the see the ocean.

This would be the fifth time that Scott Evans and I would ride the Wine Country Century, but this time we decided we wanted to see the ocean. The 200K ride (124 miles) has a loop that hits the Pacific Coast Highway at Coleman Valley Road then turns north up to Jenner before heading inland along the Russian River. My friend Victor Bruce had done it last year and it got me thinking that we should give it a try. When we started, we weren’t sure we could make it the full 124 miles, but we wanted to see the ocean.

All week long we were watching the weather reports. This, of course, would be the one day that rain was forecast. It was amazing to learn how much variation there is in online forecasts. Some said it would for a couple of hours in the morning and others said it might rain off and on all day. One hour-by-hour forecast even said there would be no rain at all (I think that one never got updated).

At any rate we decided not to let any rain damper our quest, so we all headed out at 6:38 a.m. after the course opened at 6:30. We learned later, that it probably would have been a better idea to have left even earlier. 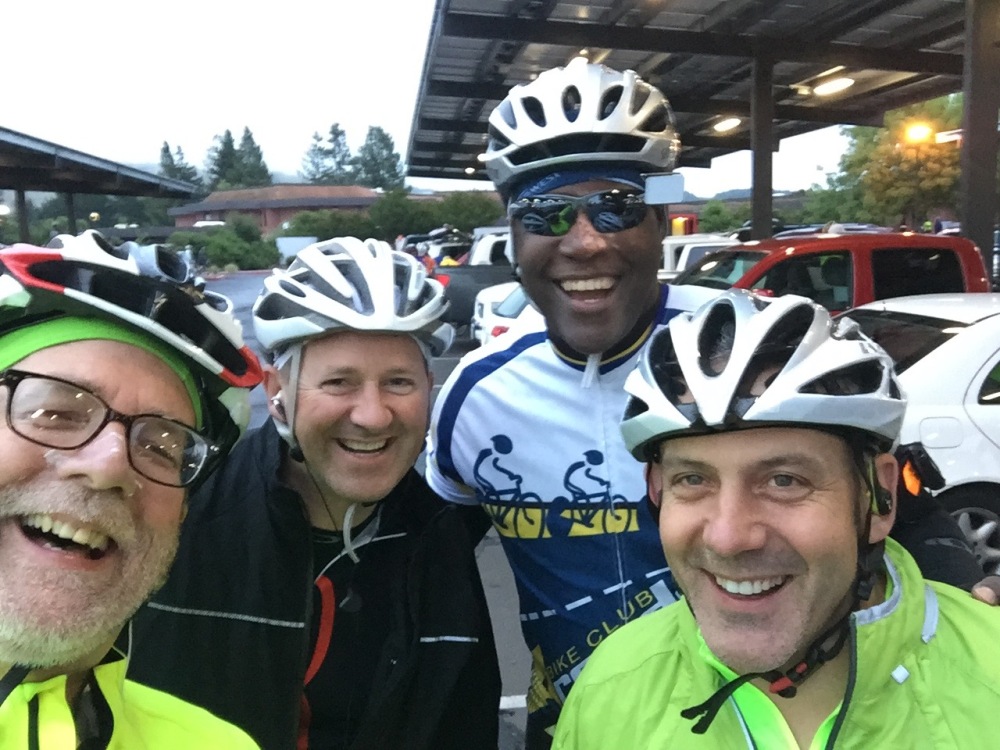 The weather was misty and the roads were slick. About five miles miles the course takes a hard left on to Oakwild Lane. I got mixed up in a group that had been in front of us and and as we made the 90 degree turn the guy immediately on my left does down! I was thinking “Here he comes. He’s going to take me out.” By the grace of God I got through, but it was such a close call.

The first 18.7 miles of the course is exactly the same ending at the Graton Road summit. But then you turn left on Facidini Rd. where in a matter of seconds you are on a pitch even steeper than the Graton Summit – good thing it was pretty short.  We headed down Occidental Road into the town of Occidental and on the left someone had crashed on the slick road.

We rode south through the town of Occidental and then made a right onto the infamous Coleman Valley Road that would take us to the coast. I think I will vote this the steepest climb of the day. It was especially tough because I had no idea what was next. Some of the great lessons of cycling, especially climbing, are that you learn to work through pain, to never give up, to experience the joy of doing what you didn’t think you could.

At the top of the mountain was our first rest stop at mile 28.8 called Ocean Song. It was drizzly and misty, the the peanut butter and jelly sandwiches tasted oh so good. As we left the rest stop I noticed I had peanut butter all over me – the handlebars, my gloves, my jacket. Mmmmmm. 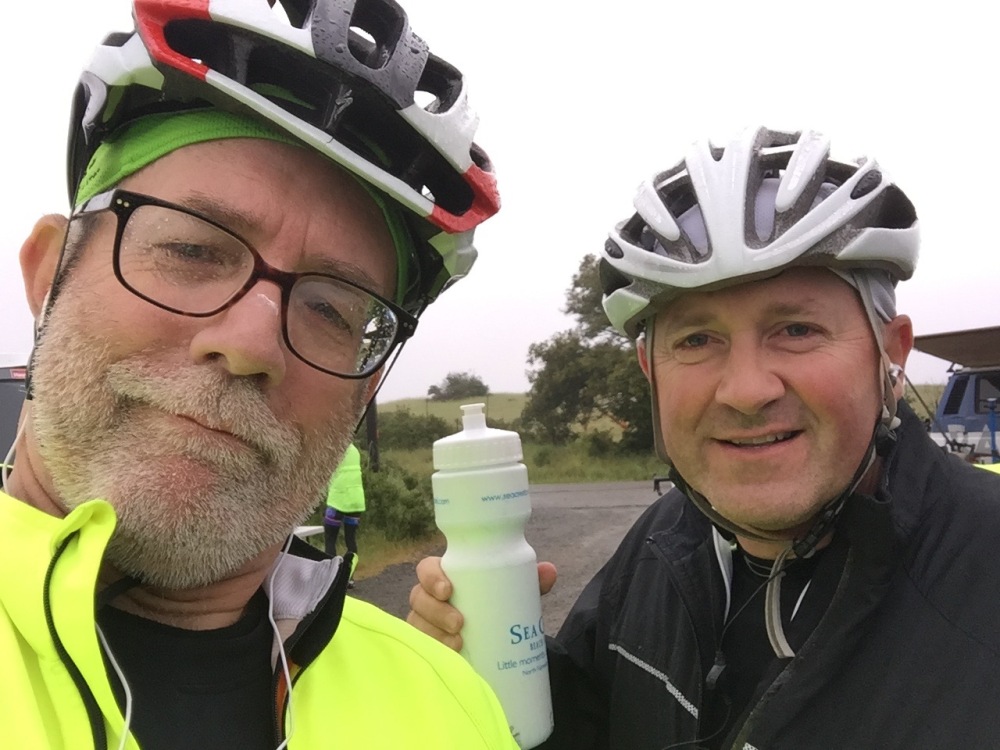 Once we left the rest stop we stopped many times to take pictures and savor the beauty.

It didn’t take long before we found our target. The Pacific Ocean.

We had been hearing all day how treacherous it was going to be riding down Coleman Valley road especially since we would have to pass over several cow catchers across the road that there would be people all along the way telling every one to slow down. Sure enough on the final one some body did something wrong and there was a crowd gathered around and soon an ambulance was on the way up. I rarely go fast downhill, but now I was definitely riding the brakes.

We stopped several more times on the way down to bathe in God’s grandeur. I couldn’t help singing in grateful praise of the beauty of God’s creation.

“For the beauty of the earth,
for the glory of the skies,
for the love which from our birth
over and around us lies;
Lord of all, to thee we raise
this our hymn of grateful praise.” 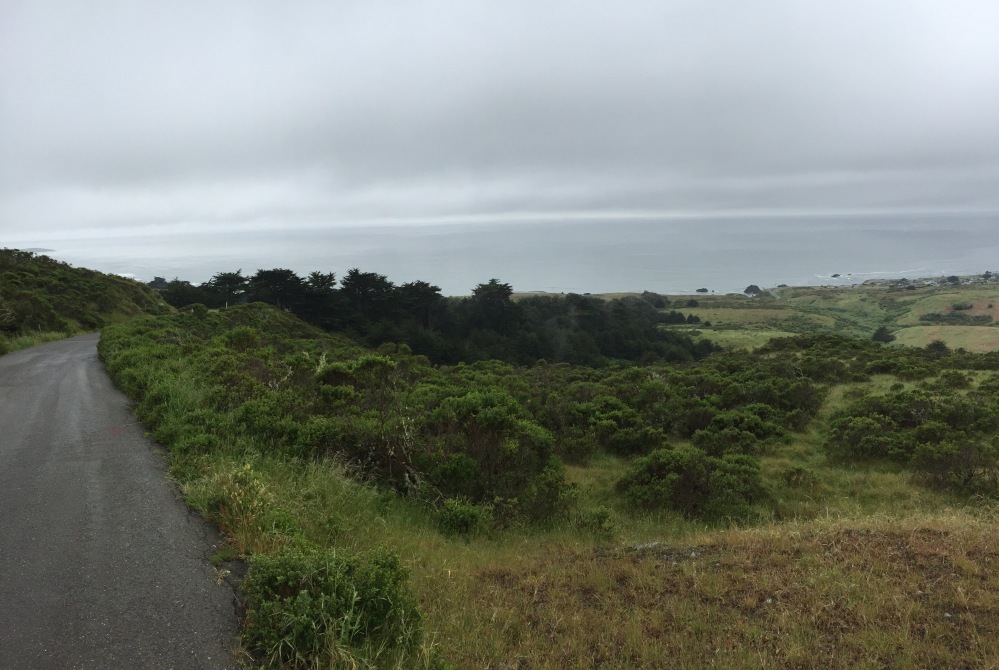 We finally reached the corner of Coleman Valley Road and Highway 1 ready to head north at mile 30.5.

So much coastal beauty to see along the seven mile ride to the inland turn at Highway 116 at Jenner and the Russian River. 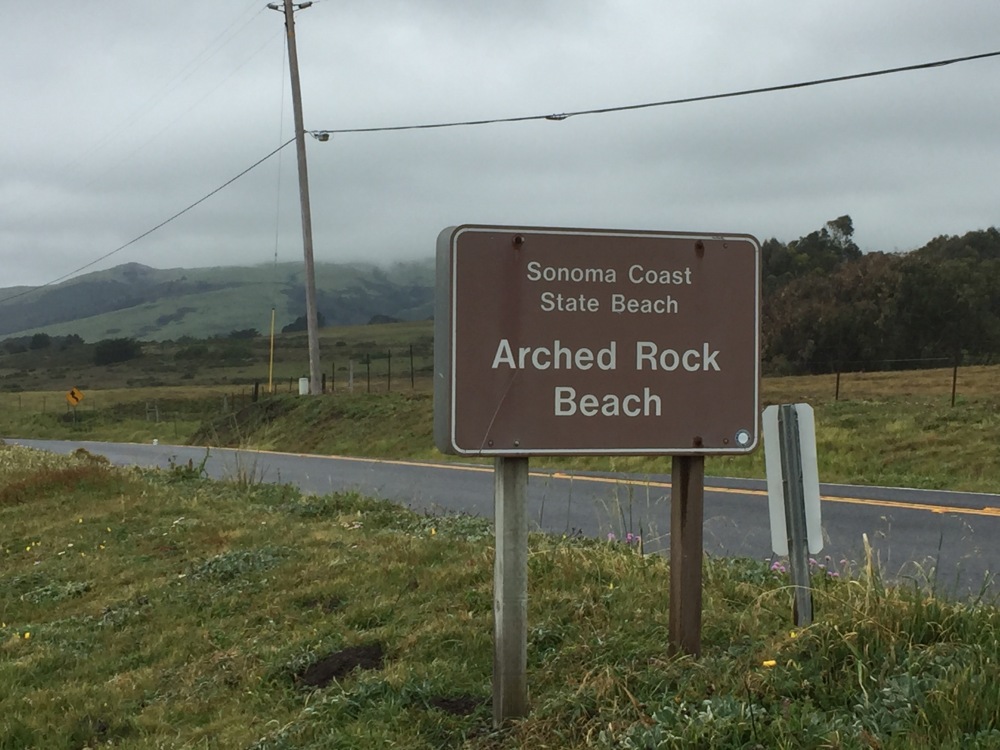 We turned inland at highway 116 paralleling the Russian River for three miles then turning right on Moscow Road at mile 40.8 at Duncan Mills crossing the river. 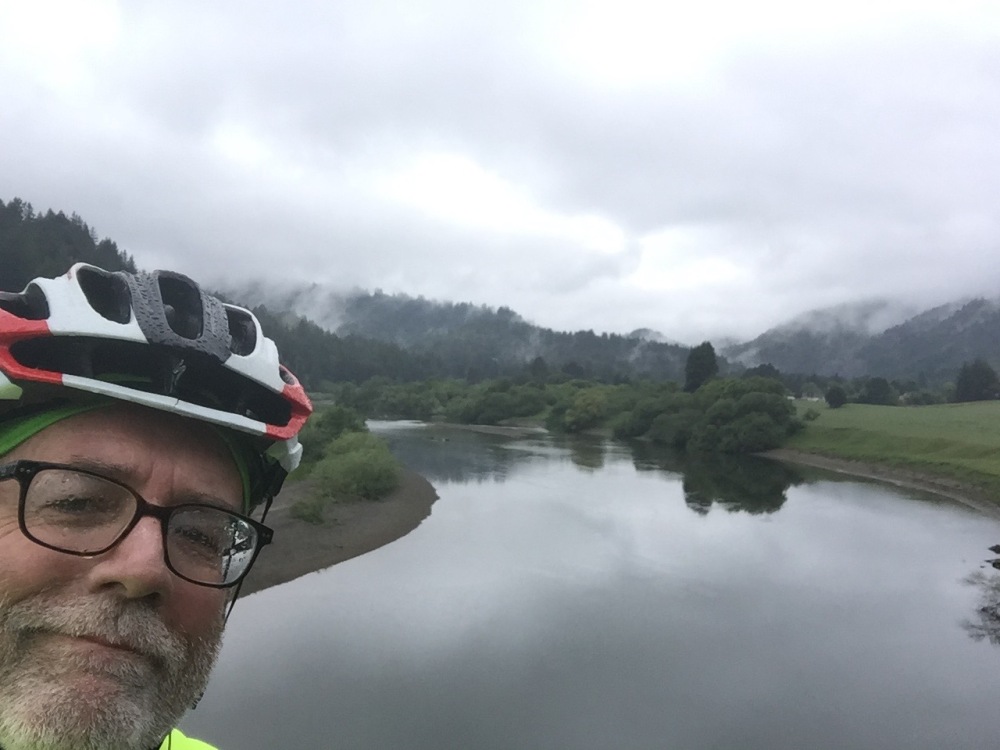 At 44.4 miles we reached the Monte Rio rest stop. It was very weird as they were closing it up when we arrived. Usually this is the first rest stop on the century route  at around mile 25 and it is bustling with activity.

Let the challenge begin. After this rest stop are three memorable climbs that have always proved a challenge. To get to this segment we had to ride  from Monte Rio along Highway 116 to Guerneville where we crossed back over the Russian River. Here is where we made a little mistake. We passed the Mays Canyon Road turn off and rode further up the road than we were supposed to. After some deliberation we turned around and found the turn. This probably added about three miles to the route. After some discussion we decided to go back to Mays Canyon and attack the three hill sequence.

First up was the Mays Canyon Summit – steep at the end, but not that long. 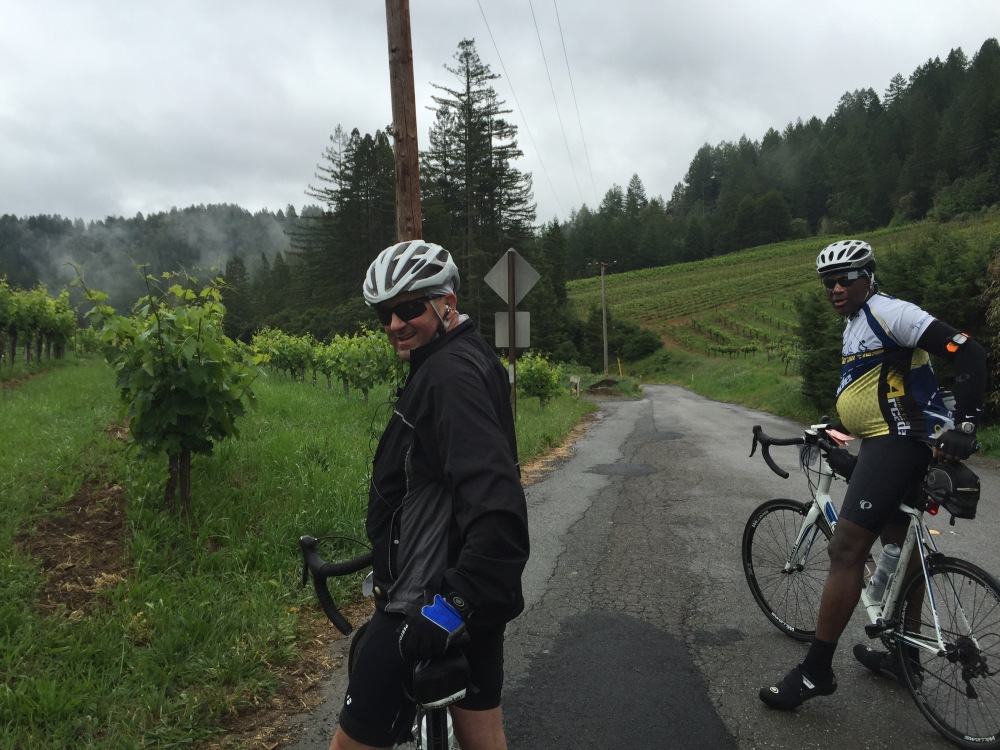 Number two was the Green Valley Summit. This was the one. On year two this was the only place on this route I ever allowed myself to stop on the middle of a climb. I could have made it but I did not realize how close I was to the top. It has kind of haunted me ever since. so much of climbing is a mind game with yourself, and it was here I let my mind win. This was my nemesis and we conquered it this time 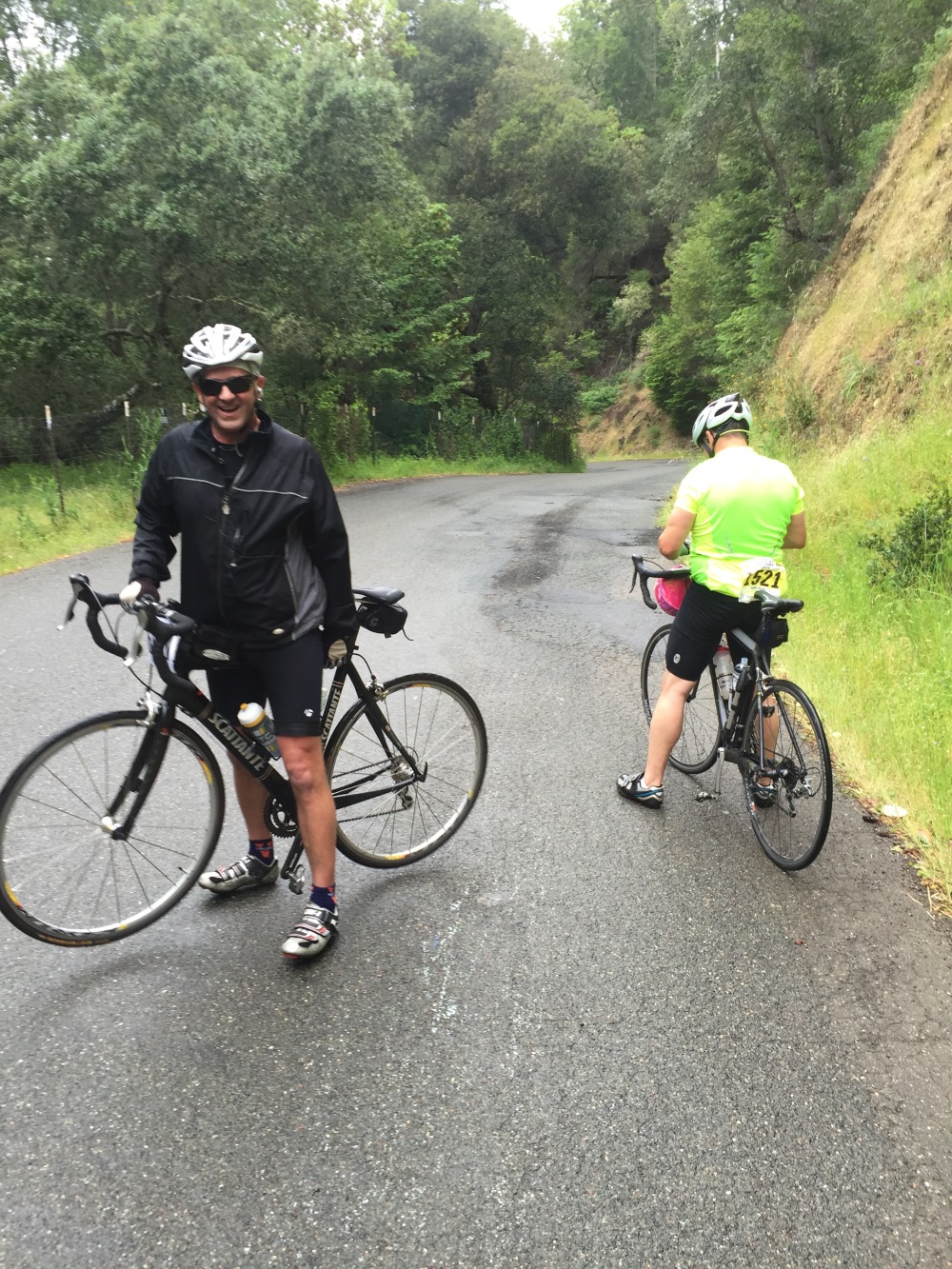 At a little past the 60 mile mark  there is a third hill called the Green Valley Summit which isn’t of much consequence unless you approach it too fast. From there it was on to the third rest stop at Wohler Bridge at the 66.5 mile mark. Again as we got there they were breaking it all down and we felt like the last people on the course.

From Wohler Bridge the course rolls through gorgeous vineyards on great road surfaces for nearly 20 miles.

Once we got to Dry Creek Road and the left turn for the lunch stop we decided to skip the nearly four miles down to the rest stop at mile 88 and instead turned right and then up Dutcher Creek Road. This is always a bit of a challenge after sitting for close to an hour at lunch but since it was so cool it really wasn’t bad at all this time.  Once at the top it’s under US 101 freeway and a right turn into Geyserville.

By the time we got there the people at the stop were talking about how many people were still on the course and I overheard two people say there were still about 50 or so left. It made us feel like such losers being this far back. The final SAG wagon headed back to the finish so we were on our own.

We began our final assault on Chalk Hill Road and the final major climb of the day. At about the nine mile to go mark is a legendary climb that is just enough of a hurdle to make those last few miles tougher than than you really need or wanted them to me. Armed with the knowledge that I had made it up and over the previous four times I was confident.

Although i wouldn’t exactly call it easy, I just stayed behind Victor and slowly but surely made it up and over the Chalk Hill summit. Challenge met.

From there it was about four miles to the finish at the Wells Fargo Center. Mission accomplished